You may have, or maybe you haven’t, seen a fun hashtag that had a sudden reemergence on Twitter on Friday night, #reversefilmplot. The rules are:

It’s time for some #Friday fun! Tweet us your best #ReverseFilmPlots and we’ll RT our favourites.

Originally tweeted by @blinkbox a couple of years ago, Friday nights hashtag party yielded some really clever and funny results. I had a crack at it myself and it was not an easy task. Just thinking of a movie that wasn’t already in the feed was proving difficult. It wasn’t even as though there were many films covered, I was just struck with a frustrating blank, similar to when you are trying to think of a word and someone tries to ‘help’ you by offering alternates and then that is all you can think of. I finally got there with the three below.

A one-armed James Franco finds an arm under a rock in the desert and attaches it to himself #reversefilmplots https://t.co/RBd19vlITi 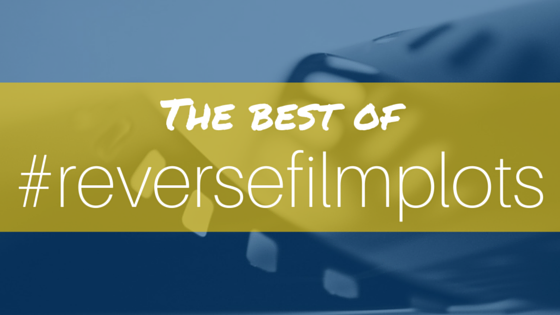 Below I have collated a few of my favourites from the night. I would love to hear your #reversefilmplots.

King delivers wartime speech. Pressure gets to him, and his friend Geoffrey Rush abandons him, so he starts stuttering. #reversefilmplots — Emily Hawker (@emhawkerblog) August 21, 2015

A millionaire breaks up with his gf & leaves her on the streets of LA where she’s forced to turn to prostitution #reversefilmplots @ThePoke — Aidan forgets why he (@aidno) August 21, 2015

@ThePoke #reversefilmplots Idiot Tim Robbins leaves his idyllic life on a beach to break into prison. He is finally discovered & released.

Messed up kid, grows apart from his father, then his sister, fixes a Death Star then goes back to desert farm to live #reversefilmplots — Andrew King (@andykg73) August 21, 2015

@ThePoke#reversefilmplots Bourne Identity. Spy forgets who he is and jumps in the sea.

She helped visualise exactly what I wanted and even though we were in 2 different states, working with her was seamless.
https://curl.co/testimonials/shes-professional-creative-and-a-pleasure-to-partner-with/
0
0
Animation and motion graphics services